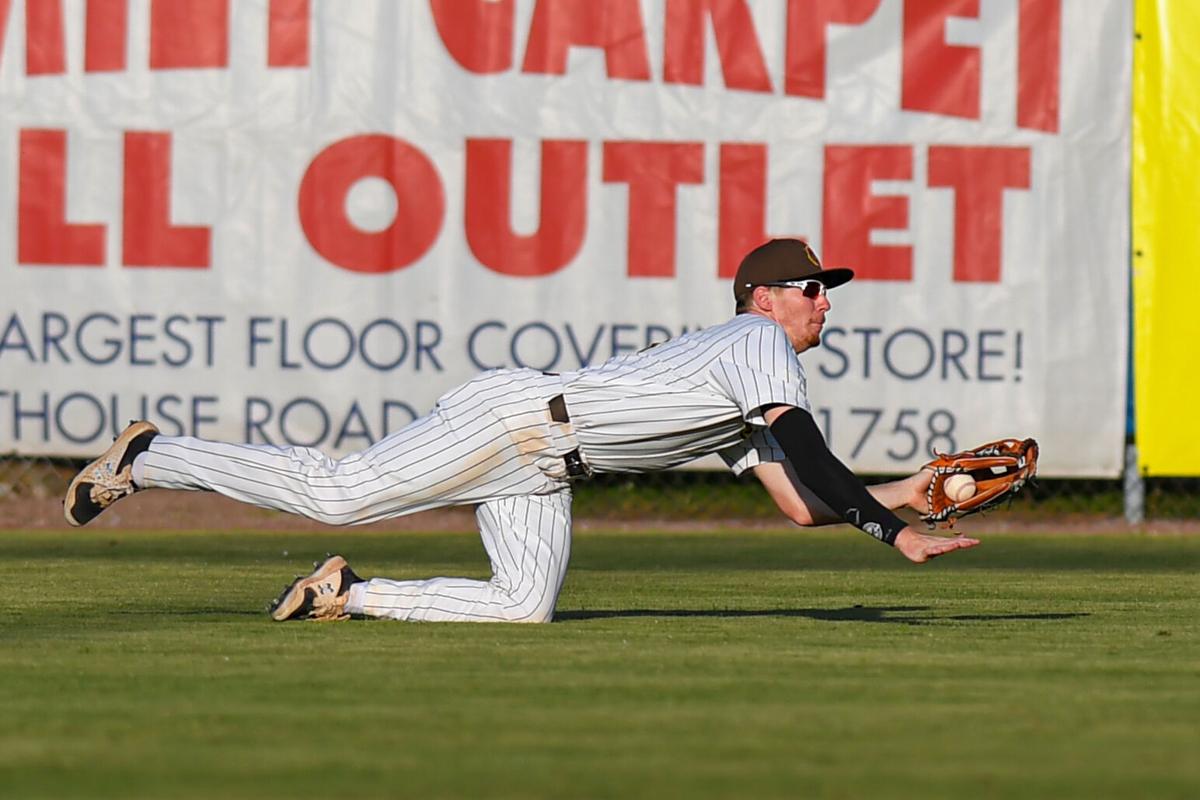 Centerfielder Nathan Holt makes a diving catch against Kingsport during Princeton’s series against the Axmen at Hunnicutt Stadium. 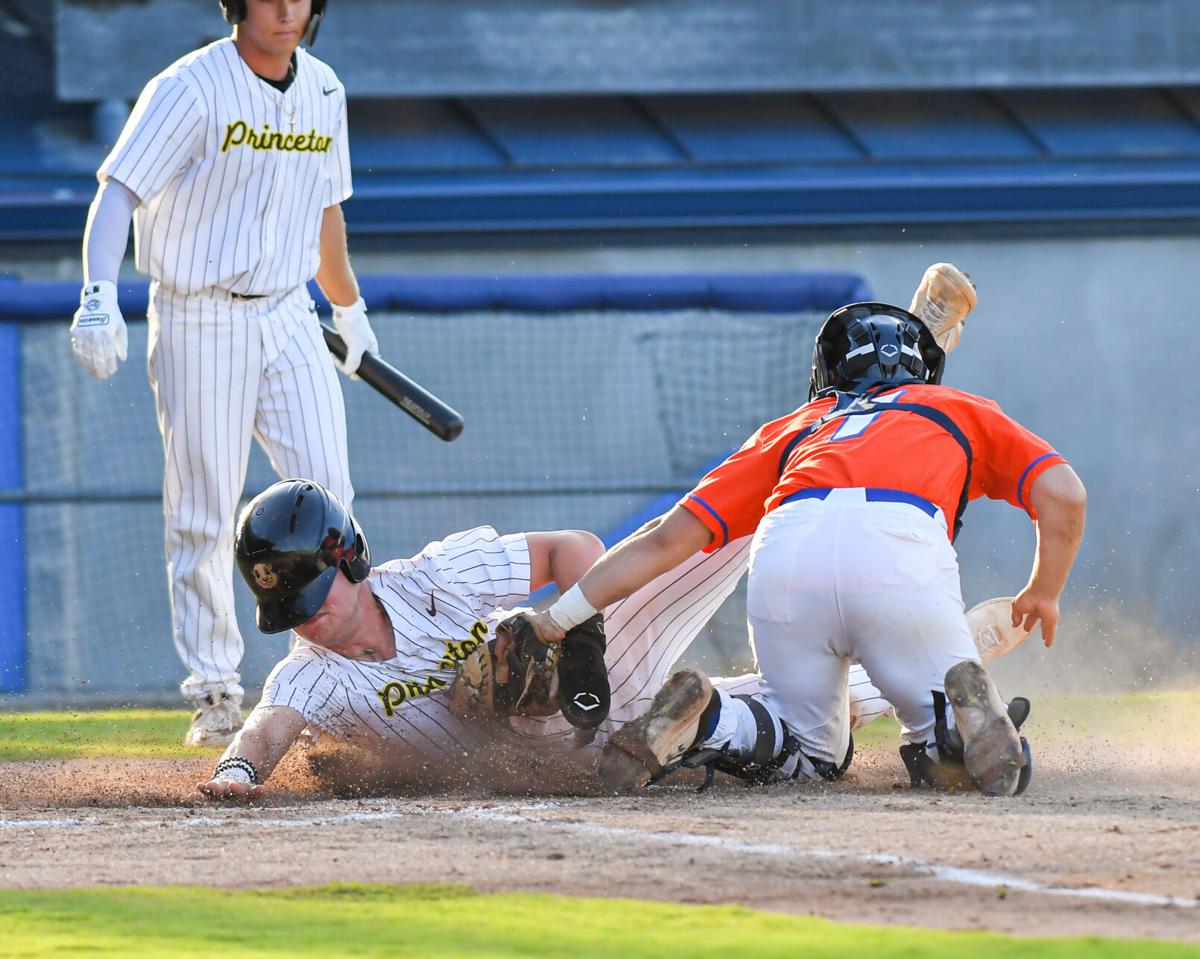 Dylan Rogers is called out at Homeplate during a Wednesday’s game against the Kingsport Axmen.  Princeton split the two game series with a win on Tuesday(7-3) and the loss on Wednesday(4-1)  Princeton still sits atop the Appy League standings with a record of 13-3.

Centerfielder Nathan Holt makes a diving catch against Kingsport during Princeton’s series against the Axmen at Hunnicutt Stadium.

Dylan Rogers is called out at Homeplate during a Wednesday’s game against the Kingsport Axmen.  Princeton split the two game series with a win on Tuesday(7-3) and the loss on Wednesday(4-1)  Princeton still sits atop the Appy League standings with a record of 13-3.

PRINCETON — Heading into the start of summer from the calendar’s point of view, the Princeton WhistlePigs remained the dominant team in the new Appalachian League. Every other team has at least five losses, compared to two for the Pigs.

They’ve done it with superlative statistics in the three main phases of the game: batting, pitching and fielding.

As of Tuesday’s league stat release, Princeton’s team batting average of .280 was just two points behind league-leading Burlington. The Pigs have been caught stealing just five times in 33 attempts.

The WhistlePigs’ pitching line shows a composite ERA of 4.38, second only to Greeneville. Those two clubs are tied for fewest earned runs allowed (59), but Greeneville has played more innings.

No pitching corps has issued fewer walks than Princeton (55) and the 79 total runs allowed are third in the league.

Fielding, an equally demanding endeavor for young baseball players, has been another strong point for the WhistlePigs. The local team is a close second to Danville in the league’s team fielding calculations, with a percentage of .964, and has incurred 18 errors in 14 games.

Individually, Princeton outfielder Dylan Rogers led the league with five home runs and was tied for first in total bases (38) in season statistics through Monday’s games. He was tied for second in triples (3) and was third in runs batted in (17).

During the academic year, Rogers plays for Chattahoochee Valley Community College in Alabama.

Nathan Holt is among the league’s most feared base stealers, going 7-for-7 in that department as of Monday’s season stats. The outfielder from North Carolina was third in the circuit in hitting doubles (6) in the stat breakout.

It all added up to a 12-2 overall record for the WhistlePigs after a 4-1 run in games played from Thursday of last week through Monday.

Here’s how that timeframe developed.

Princeton 11, Burlington 5 on June 17. In their first trip to the Tar Heel State, the Whistlepigs scored nine unanswered runs in the middle innings to wipe out an early 2-0 deficit. Doubles by A.J. Jones and Holt generated four runs in the fourth inning to sustain the rally. Princeton starter Justin Showalter struck out six batters in four innings; Brody Eglite followed him on the mound and got the pitching win, giving up two hits and no runs in two innings.

Princeton 9, Burlington 5 on Saturday. The Pigs went 4-0 all-time against the Sock Puppets on Friday night. Rogers’ two-run homer in the fifth put the visitors ahead to stay. Each side recorded 12 strikeouts. Jackson Reid took the win on the mound, with two hitless, scoreless innings pitched.

Danville 8, Princeton 7 on Sunday. The Otterbots pushed across the winning run in the 11th inning in a game that lasted almost four hours. Princeton was outhit 10 to 6; three of the Pigs’ hits were struck by Brady Day. Reliever Eli Wright gave up one hit and no earned runs, but was saddled with the pitching loss. The teams combined to strand 29 men on base.

Princeton 10, Danville 4 on Monday. Avoiding a second straight loss, the Pigs took a 3-0 lead in the first stanza and remained ahead throughout in their fourth road game in four nights. Jones drove in three runs on a 2-for-4 day, and Tommy Myint added a solo home run in the fifth. Taylor Catton notched his first Appy League pitching victory with 3 2/3 innings of relief.

Princeton 7, Kingsport 3 on Tuesday. In their return to Hunnicutt Field, the Pigs scored the last four runs of the game, all in the seventh inning, to break a 3-3 tie and overcome the Axmen. Tyler LeBlanc fanned five batters in three frames, while Day drove in three Princeton teammates.

The WhistlePigs host games throughout this weekend at Hunnicutt. Elizabethton wraps up its visit to Princeton today with first pitch scheduled for 7 p.m. On Saturday and Sunday, Pulaski provides the opposition.

After Monday’s day off, the Pigs finish up the month of June with a two-day road swing to Kingsport, Tenn.