Riley Fitzwater makes the easy layup in this file photo from earlier this year. 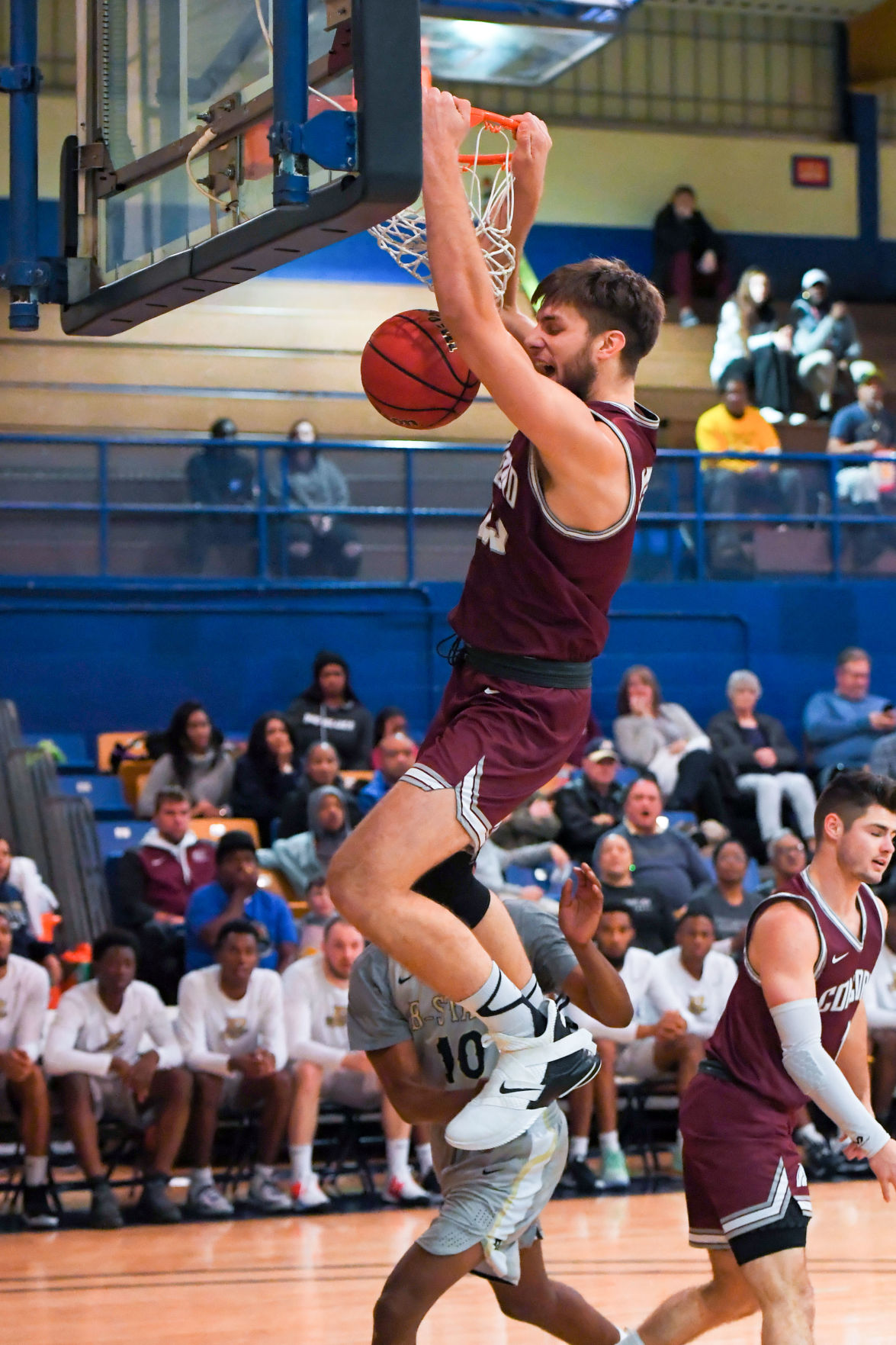 Simon Kovac makes a statement with massive two-handed dunk against Bluefield State as the Mountain Lions handed the Big Blues a home loss 81-70.  The 6-8” senior Kovac had 16 points and 8 rebounds

Riley Fitzwater makes the easy layup in this file photo from earlier this year.

Simon Kovac makes a statement with massive two-handed dunk against Bluefield State as the Mountain Lions handed the Big Blues a home loss 81-70.  The 6-8” senior Kovac had 16 points and 8 rebounds

ATHENS — Concord University basketball season got underway this past weekend with the teams opening on the road. The men kicked off at the IRMC/Hilton Garden Inn Classic at the Kovalchick Center on the campus of Indiana Penn. While the women faced challenges in Fairmont in the MEC-PSAC Challenge. The Lions then headed home where both faced cross county rivals Bluefield State College

The Concord men opened action Friday night against former WVIAC member Pitt-Johnstown, using a strong defensive stand late in the game to seal a 79-76 win in the opening of the tournament last Friday night.

CU controlled most of the first half as it never trailed until the Mountain Cats finished the first 20 minutes on a 10-0 run to lead 40-37 over Concord at halftime. The Mountain Lions never allowed Pitt-Johnstown to stretch its out in the second as the largest deficit CU faced was seven.

Down 66-61 with 8:16 left in the game, Concord held UPJ to 3-for-10 shooting over the remainder of the game. Facing the five-point deficit, CU went on a 7-2 run to tie the game as freshman guard Ethan Heller tossed in five of the seven points. At the final media timeout of the game, the Mountain Lions still found themselves down, 70-68.

The Mountain Cats got a bucket out of the timeout to go up by four, but another Heller jumper and a three-pointer by junior forward David Bea Mulumba with 2:28 remaining gave Concord its first lead of the second half. UPJ answered with two free throws, but senior guard Trey Brisco canned two foul shots of his own with 1:23 to put Concord up for good. Junior guard Martin Kelly Jr. and Heller each sank two free throws in the final 30 seconds as the Mountain Lions hung on.

The Concord women also opened their season Friday at the MEC-PSAC Challenge at Joe Retton Arena in Fairmont against former WVIAC opponent Seton Hill. Unlike the men, though, the women fell 93-82 after a barrage of three-pointers by Seton Hill.

The Griffins connected on eight three-pointers in the first quarter to open up a 30-12 lead on Concord. CU chipped away at the Seton Hill advantage throughout the second quarter and was able to get back within single digits, 44-36, on a jump shot from senior forward Madison May with 1:59 left in the half. However, SHU outscored the Mountain Lions by eight over the final two minutes to take a 53-37 lead into halftime.

Seton Hill ran its lead out to as much as 24 points, 75-51, with 2:37 left in the third. But, CU wasn’t done making a run at the hot-shooting Griffins who made 18 three-pointers in the contest.

Down 17 heading to the fourth quarter, May got Concord within 12 points, 80-68, after her only three-pointer of the game with 8:52 left. The 12-point margin was just about as close as the Mountain Lions got the rest of the way, although they did get within 10 points, 90-80, after a layup from sophomore guard Gracie Robinson.

The Saturday games of the respective tournaments saw a reversal in fortune for both Concord teams as the men fell to the nationally-ranked IUP Crimson Hawks 80-73 on their home court and the women won 86-60 over the Lock Haven Bald Eagles in the MEC-PSAC Challenge.

In the men’s game, the first half featured 11 ties and three lead changes with neither team holding more than a six-point advantage in the first 20 minutes. IUP (2-0) was up two points at halftime, 34-32, and briefly took a five-point lead early in the second half before Kovac made a layup and sophomore guard Brandon Kennedy connected on a three-pointer to tie the score 42-42, for the 12th and final time.

From there, the Crimson Hawks went on a 15-4 run to open up its largest advantage of the game, 11 points, with 12:20 remaining in the game. Concord (1-1) responded with seven straight points to get within 57-53. However, the closest CU got in the next few minutes was three points.

Down eight, 74-66, with 1:27 left to go in the game, junior forward Liam Evans made two free throws and Johnson hit a three-pointer on Concord’s next possession to draw within three points. But, IUP made all four foul shots down the stretch to hold the Mountain Lions off.

The Mountain Lions were down 17-14 after the first quarter, but stifled LHU in the second quarter. CU scored the first 11 points of the second period before Lock Haven got on the board at the 5:31 mark of the quarter. Guynn had eight of her game-high 19 points in the first four minutes of the second to spark the Concord run.

In the next five minutes, Fitzwater and May combined for 10 points while Concord held the Bald Eagles to a 1-for-19 from the field in the second quarter to take a 39-22 lead into halftime.

After Lock Haven got the CU lead down to 14 points, 44-30, with 7:39 left, the Mountain Lions shot its lead over 20 points for the first time in the game, 53-32, at the 3:58 mark of the third quarter on two of junior forward Tamra Scott’s third quarter points.

Concord’s lead grew to as much as 38, 77-39, points after a three-pointer by junior guard Keely Lundy in the first two minutes of the fourth before settling for the 26-point victory.

After the tournament openers, the Lions returned to Mercer County and faced off against the Bluefield State College Big Blues where both teams picked up the “W.”

The men’s team outscored Bluefield State 16-8 in the first eight minutes of the second half to go on and win 81-70 Tuesday night in a rivalry game at Ned Shott Gymnasium.

The Blues stretched their lead to as much as four points in the closing minutes, but Concord took a lead of 40-37 into halftime as Brisco and Johnson had back-to-back buckets in the final minute of the first half.

To start the second half, Kovac scored six of the first eight points to push Concord out to a 48-41 lead. Bluefield State hung around and got the deficit back down to three points, 48-45, with 16:37 left.

However, CU held BSC without a point for the next four minutes as Kovac kick started another spurt with a dunk. Mulumba capped the run with a three-pointer to give Concord a 56-45 lead with 13:26 to go.

Bluefield State did not go away as it worked the CU lead down to 56-52 with 11:21 left, before Heller connected on back-to-back three-pointers to stretch the lead back out to double digits.

One more time, the Blues got within four points, 66-62, with 5:17 remaining. The Mountain Lions used the three-pointer to thwart any more BSC comeback attempts as Johnson hit consecutive triples at the 4:07 mark, and Bluefield State would never threaten again.

Johnson led all scorers in the game with 21 points on 8-for-14 shooting. Kovac just missed a double-double of 16 points and eight rebounds on 8-for-11 shooting. Heller notched 16 points while Brisco tallied 10 points and seven rebounds.

The Concord women completed the double-header sweep of BSC by running past Bluefield State, 75-45.

The Lady Lions jumped out to a 24-12 lead after the first quarter as Fitzwater and May combined for 13 of the 24 points. BSC (1-1), though, did not go away quietly as it outscored Concord, 14-13, in the second quarter.

Holding the 11-point margin at halftime, CU began to slowly pull away from Bluefield State in the third quarter. With a 44-32 lead at the 6:24 mark, Fitzwater hit a layup that started a 13-2 run over the next five minutes. May scored six of the 11 points. Freshman guard Nakaila Gray added a three-pointer in the spurt.

Up 23 going to the fourth quarter, the Blues were only able to work the deficit back under 20 points once more in the game—59-40 at the 8:23 mark fourth. From there, CU scored nine straight points to put the game out of reach. Guynn threw in seven of her 17 points during the run.

May finished with a double-double of 19 points and 11 rebounds to go with three steals. Fitzwater joined Guynn and May in double figures as she posted 14 points. Eleven different CU players scored in the contest.