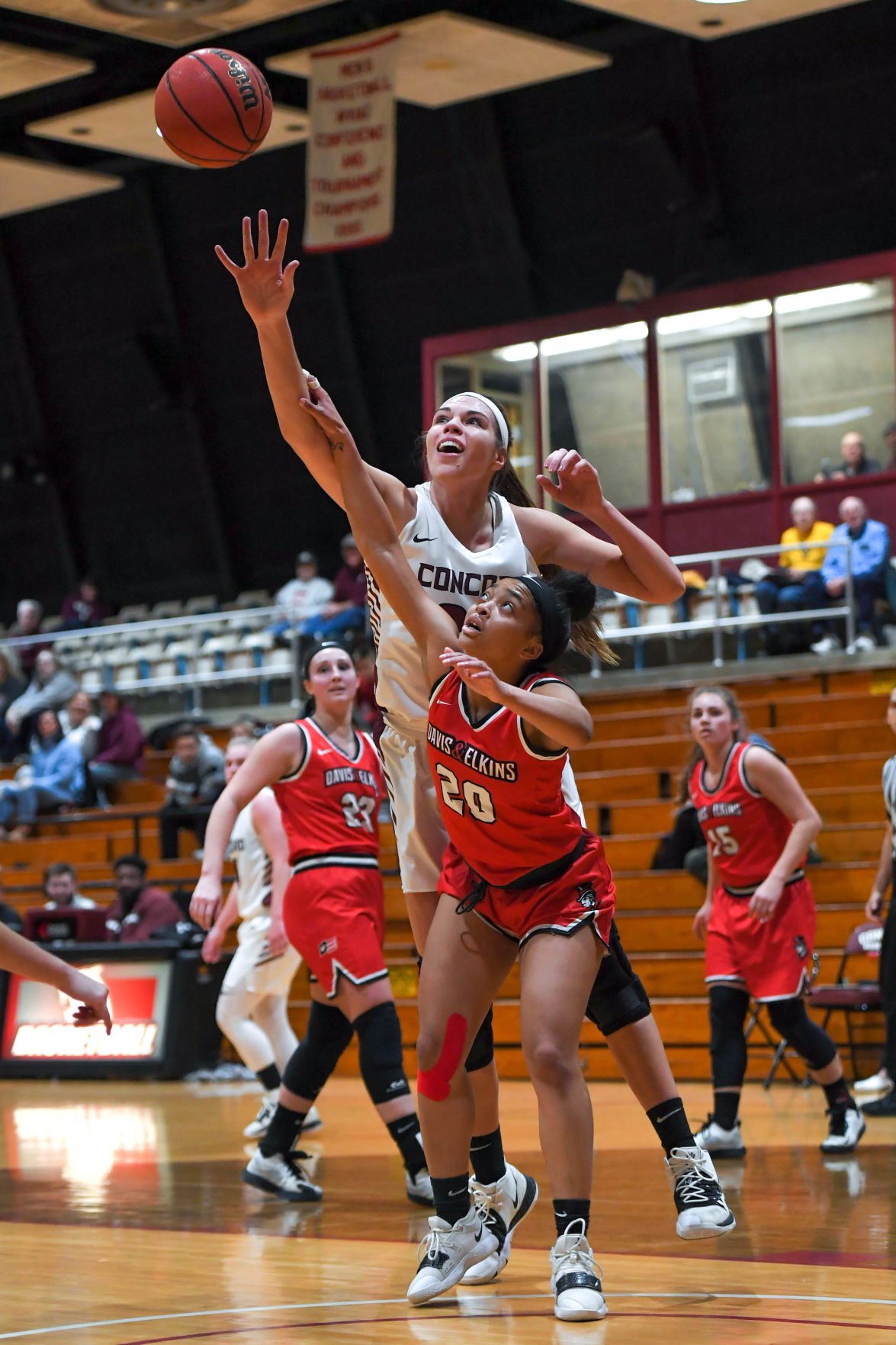 Riley Fitzwater reaches for a loose rebound over a smaller player for Davis & Elkins.  Fitzwater missed the triple double by one blocked shot as she had 18 points, 15 rebounds , and 9 blocks shots in Concord’s one-sided victory 82-47. 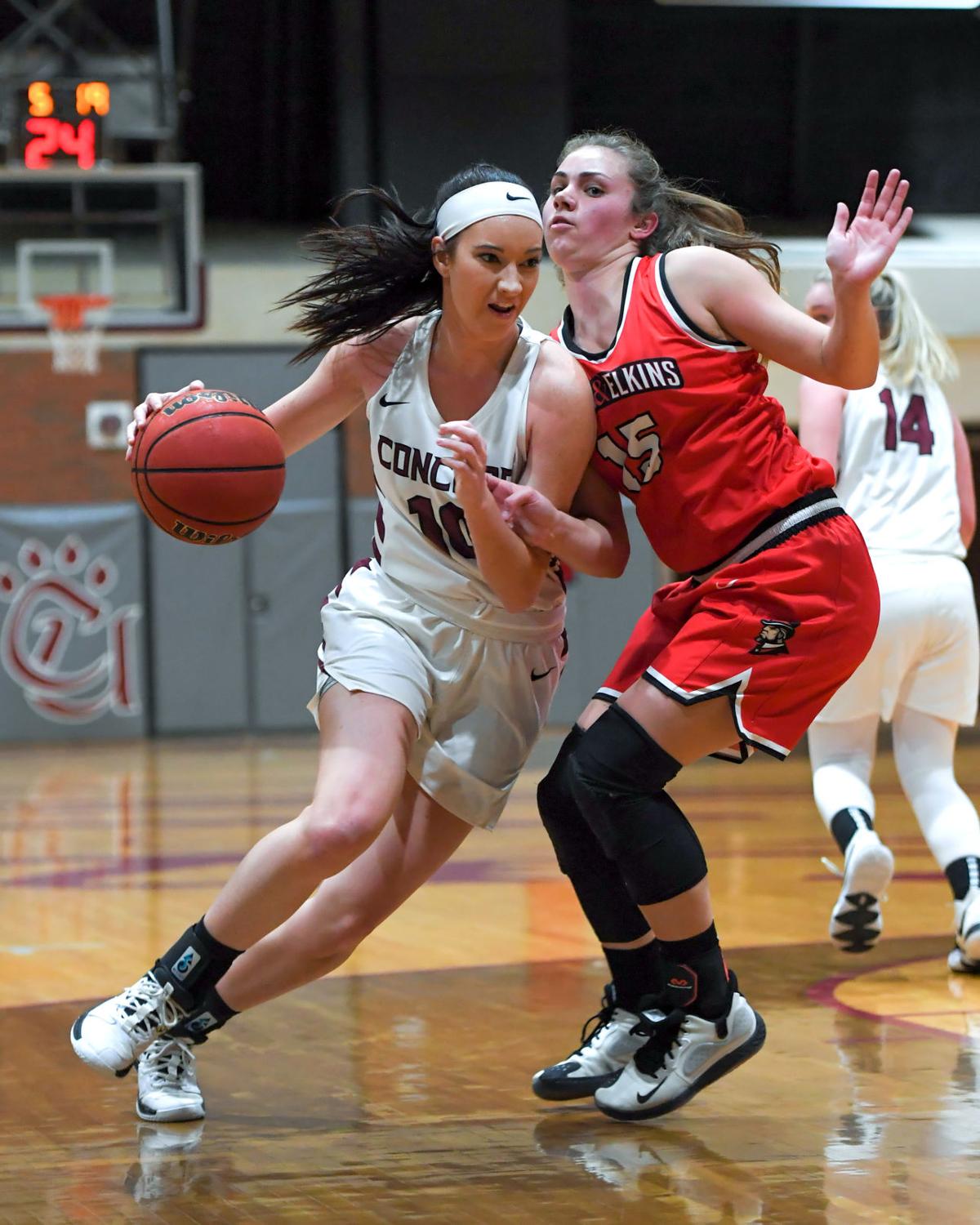 Riley Fitzwater reaches for a loose rebound over a smaller player for Davis & Elkins.  Fitzwater missed the triple double by one blocked shot as she had 18 points, 15 rebounds , and 9 blocks shots in Concord’s one-sided victory 82-47.

ATHENS — The Concord women’s basketball team vetoed the Senators of Davis & Elkins College on Saturday, giving up only 13 points in the second half of an 82-47 Mountain East Conference win at the Carter Center.

“We did a great job of defending,” said Concord head coach Kenny Osborne. “When you get a lot of stops, they lead to easy baskets. … Being able to play well at the defensive end, that made the offense go.”

“I was glad that we came out with energy today. We had great floor spacing, we shared the ball. It was a great team win.”

All five starters scored in double figures for Concord (11-4, 8-2 Mountain East). Again leading the way were Madison May and Riley Fitzwater.

May, the second leading scorer in the conference, generated 19 points, seven rebounds and seven assists. Fitzwater, who leads the MEC with 4.2 blocks per game, rejected eight of D& E’s attempts and posted a double-double with 18 points and 15 boards. The national leader in field-goal percentage, Fitzwater made nine of her 14 shots Saturday.

Two freshmen were instrumental in the CU attack. Ashton Funderburg had four of Concord’s 11 steals and Jazz Blankenship made half of her six 3-point tries on her way to 12 points.

“I thought Funderburg played great off the bench,” Osborne said.

But the Senators turned the ball over 17 times and were out-rebounded 30 to 15 off of their offensive misses. The visitors shot 22.6 percent from the floor while Concord had a 52.5 percent success rate. Concord led in fast-break points, 15 to zero.

Concord opened the game going 7-for-7 from the field. A triple by Blankenship gave CU its first double-digit lead, 11-2. Johnson scored all of her team’s six points in the final four minutes of the first half to bring D& E within five points, 39-34, at intermission.

The Mountain Lions ran away with the game from there, scoring the first 14 points after the break.

Concord plays a doubleheader at Charleston on Wednesday.

“That’ll be a war,” Osborne said. “We were fortunate enough to beat them here, in overtime, back in November. We’ll have our hands full up there on Wednesday.”

In the men’s game on Saturday, the Mountain Lions shot 57.1 percent from the floor in the second half of an 80-63 win over the physical Senators.

“It was definitely much needed,” CU coach Todd May said about Saturday’s victory. “I just want to give our guys a lot of credit. They just kept plugging away, and plugging away and continuing to work.

“It’s tough when you’re losing games. We had five (losses) in a row, but they never flinched. They continued to work hard. We have great kids.”

May said that even during the drought, “Each game, we were building, and we were doing some things well. … We’re limiting our turnovers, which is allowing us to be more efficient on the offensive end. We’re continuing to get better, day in and day out, and that’s the key.”

Davis & Elkins (5-11, 3-7) took an early 8-2 lead Saturday but Concord kept their guests scoreless for almost seven minutes and once CU got ahead 12-10, the Mountain Lions never trailed again.

May said, “… We knew we were going to see a lot of zone. We were able to make enough plays against the zone to get them out of it, and once they went ‘man,’ we were able to go out in the second half and shot 57 percent. I thought that was the key to the game.”

Four Concordians were in double-figure scoring at the end. Senior Trey Brisco had 18 points and four assists. Martin Kelly Jr. had 15 points and eight rebounds off the bench. Brandon Kennedy had 12 points and Cole Meadows had 10. Malik Johnson chalked up nine points, five assists and five boards.

For the Senators, Erkam Kiris and Myles Monroe provided 22 points and six rebounds each. The third-leading scorer in the MEC, Donte Doleman, had eight points, primarily due to Brisco’s defensive efforts.

May’s roster was depleted by injury. Liam Evans and Seth Brown did not suit up Saturday, and Meadows, who’s become a key reserve, limped off the floor late in the game.

May said he liked the character his players have shown. “Whoever I throw out there, they go out and try to do the best they can. As long as they do that, I’m happy.”