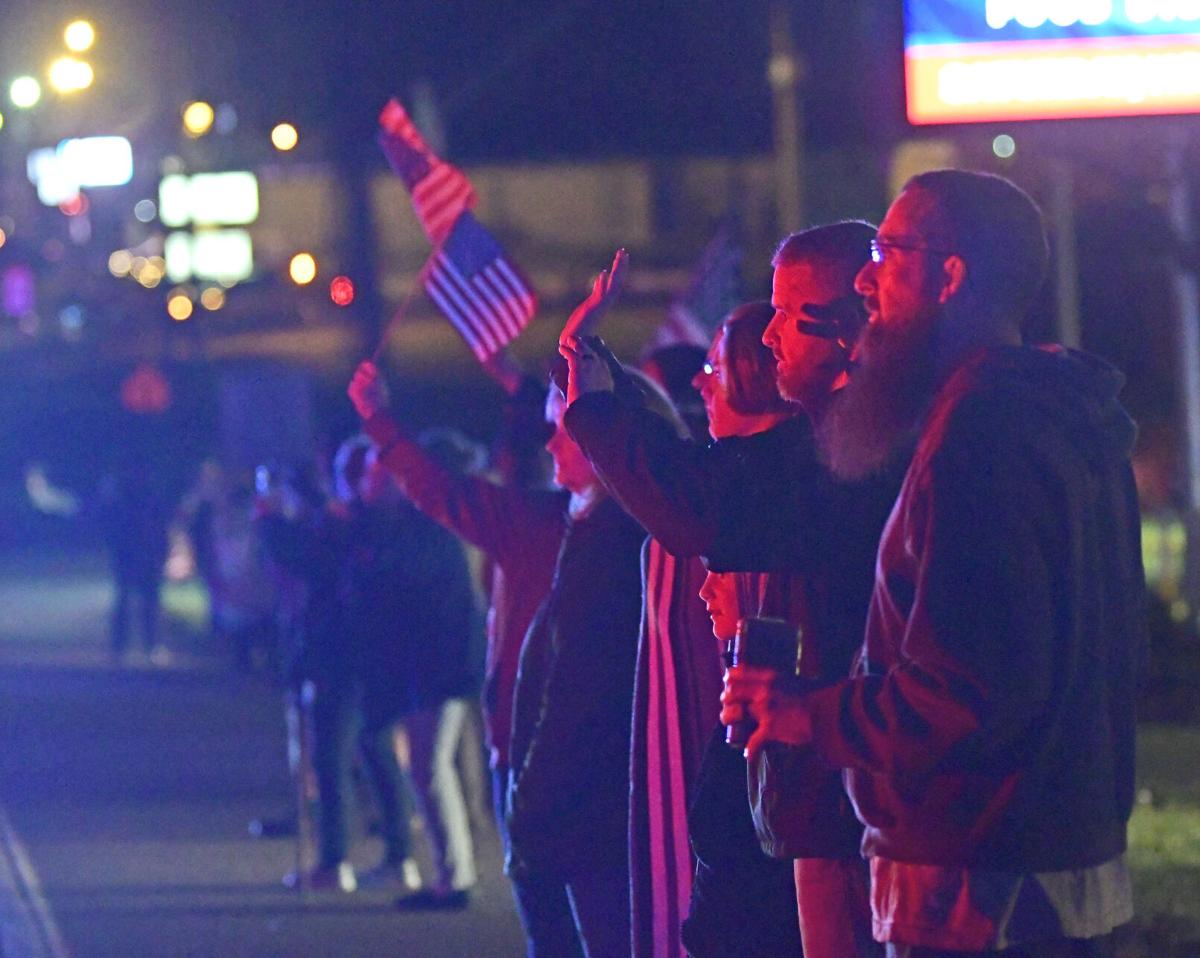 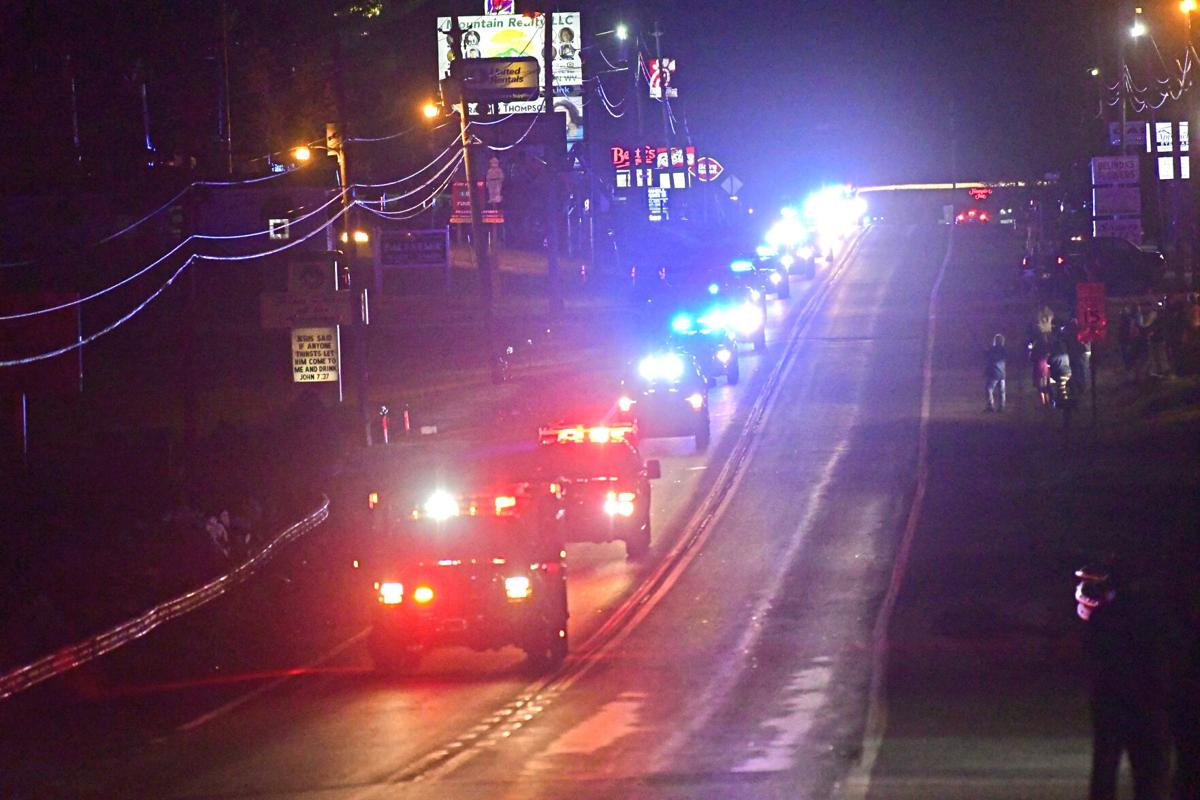 William J. Thompson’s long ambulance ride from Fairfax back to his hometown of Princeton saw him escorted down Oakvale Road by law enforcement and other agencies on Friday, Nov. 12.

William J. Thompson’s long ambulance ride from Fairfax back to his hometown of Princeton saw him escorted down Oakvale Road by law enforcement and other agencies on Friday, Nov. 12.

PRINCETON — A veteran’s long ambulance ride home from a Virginia hospital concluded Friday evening with a welcome filled with support and love as well as a law enforcement escort.

William J. Thompson, a native and lifelong resident of Princeton, was a sergeant with the U.S. Army in Iraq when he was among the troops exposed to the smoke emitted from burn pits used to incinerate toxic materials. This exposure led to two double-lung transplants and eventually to cancer.

Thompson came home Friday from the Inova Transplant Hospital in Fairfax, Va. When the community learned that he was returning to Mercer County, the word went out on social media and a warm welcome home was organized. More than a dozen cruisers representing the Mercer County Sheriff’s Department, the West Virginia State Police and other agencies were waiting near the Giles County, Va. line with blue lights flashing to escort his ambulance.

And the effort to welcome Thompson home did not end with the escort. Friends and family were waiting along Oakvale Road and Athens Road to greet him.

Thompson’s sisters, Samantha Blankenship and Clarissa Abernethy, were among the many people waiting in front of the Maranatha Baptist Church for the procession.

“Will, he’s a wounded warrior,” Blankenship said. “He’s suffered lung damage from being in Iraq around the burn pits. He’s had two lung transplants – two double-lung transplants – and because of the medicines he’s been on, because of that he had gotten cancer and he is being sent home from the transplant hospital for hospice care.”

Thompson and his wife, Suzanne Six-Thompson, had a role in starting studies into the effect of burn pits on lungs, Abernethy said.

“He’s been instrumental in making the Army realize there was a disease and that it was coming from the burn pits. He’s been to Congress, he’s been all over the place fighting for the cause of the Army recognizing that it is an actual ailment and it will be covered under disability benefits for the military,” Abernethy said. “He’s a good man, a loving husband and father. He’s a pillar of the community. He’s worked at the hospital. He was a medic in the Army and he came back and was an LPN at the hospital.”

Thompson’s wife, Suzanne Six-Thompson, was riding in the ambulance when they arrived in Princeton.

“It was amazing,” she said later. “It was so heartfelt to see the community come together for my husband, who’s been through so much. He truly deserves it.”

She said that her husband had pulmonary fibrosis when he returned from Iraq in 2010, which is “pretty much a terminal condition.” He had his first lung transplant in 2012 and then another in 2016. Due to complications brought on by the transplant medication he had to use, he had a higher risk for skin cancer. He developed skin cancer and had to endure radiation treatments and chemotherapy, fighting the cancer for 10 years.

“Right now, he’s just tired,” she said. “His body’s tired, he’s tired of the pain and he’s just decided that his fight is over. It’s so heartbreaking to see.”

Thompson was able to see how the community was greeting him when the ambulance reached Princeton. A EMT helped him raise his head so he could see the flashing blue lights and the people greeting him from the road.

“And it just ended up being great, great turnout,” she recalled. “I was crying and smiling at the same time. Being in that ambulance and seeing all those people on the side of the road, it really meant a lot to me and my kids.”

Thompson’s son Ethan, 18, and daughter Ava, 14, were following the ambulance.

“We appreciate everyone’s prayers,” Six-Thompson said. “We’re glad to be part of this community.”

Chief Deputy Alan Christian of the Mercer County Sheriff’s Department drove in the procession. Christian and several of the department’s deputies know Thompson.

“It kind of came around at the last minute,” Christian said. “I went to high school with him. It’s a small town and everybody knows everybody, it seems like.”

Despite all the hardship, the Thompson family has shown steadfast faith in their religion, Christian said.

“It’s inspiring to see a family have that much, it really is,” he added.

Captain R.A. Maddy with the West Virginia State Police also knows Thompson. His wife is among the people who went to school with him.

The welcome started when Suzanne Six-Thompson posted an announcement on Facebook, Maddy said, who learned about it when he encountered Christian at a Princeton restaurant. Maddy alerted all the troopers who could participate. A large group of people were waiting on Oakvale Road when the procession arrived, and even more were waiting to greet Thompson at the Athens Crossroads.

“I think everybody that showed up that night just wanted to show their love and support and the respect they have for Will,” he said.

COVINGTON [mdash] Warren Homer Linkous, 90, of 791 E. Carolton Drive died Monday, October 25, 2021, at his home. Mr. Linkous was born March 23, 1931, in Princeton, WV, a son of the late Luck John Linkous and Martha Jane Boyd Linkous. In addition to his parents, he was preceded in death by on…