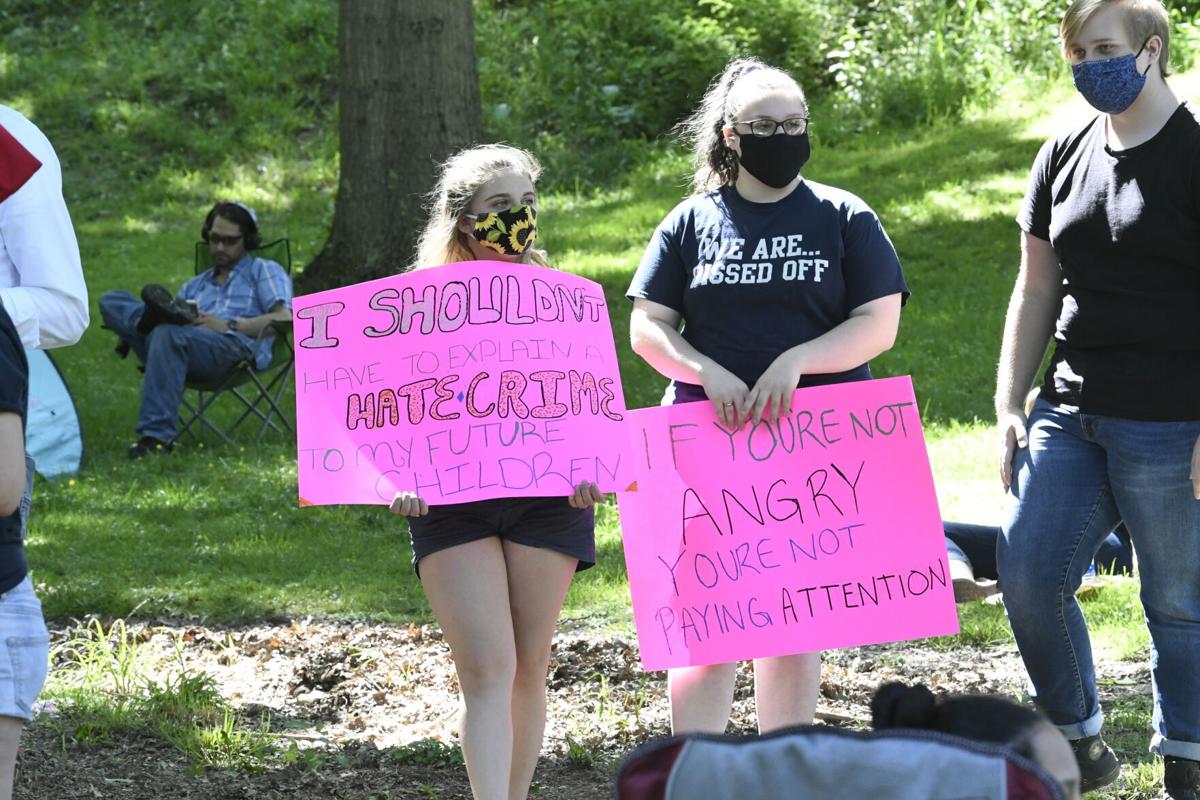 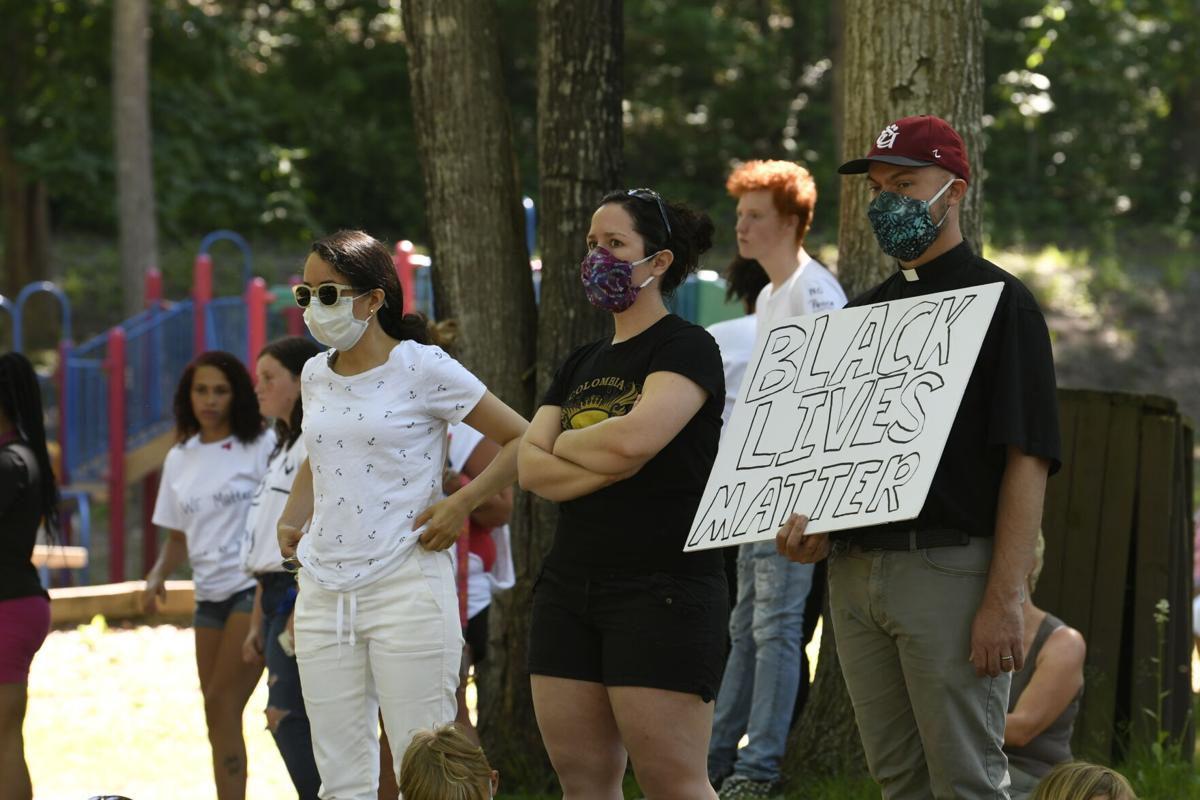 PRINCETON — A “peaceful vigil” was held at Princeton City Park Sunday afternoon with about 200 people gathering to call for social and institutional change to end racial injustice in the wake of the murder of George Floyd.

Floyd died recently after a Minneapolis, Minn. police officer put his knee on Floyd’s neck and held him facedown on the ground, as Floyd said, “I can’t breathe.”  The incident caught on video has sparked an international outrage.

McKinney said Je’Dah Palmer and Laiken Johnson, who did not know each other, reached out to her to organize event.

“Within a 24-hour period I had seven people of different ages reach out to me and ask to help them organize an event,” she said, “They are so passionate and so many people are moved right now.”

McKinney said she knew it was time to “embrace” the reaction and “allow the conversation to take place … so many people in the community care about these issues.”

The murder of Floyd was a catalyst, she said, because of the callousness of his death, including the blatantness of what happened and the “look in his eyes” as he said, “I can’t breathe.”

The video had an impact like no other, she said, and it sparked worldwide attention and protest.

McKinney said this is more than a moment, it is a “movement” that has seen people finally getting involved to “speak out for what’s right.”

“Lori actually brought me and Laiken together because we both had the idea to do the same thing,” Palmer, a singer/songwriter of Princeton, said. “We were able to come up with this idea to come to the park and unite everyone.”

Johnson, who is 25 and a Registered Nurse from Lashmeet, said she had felt “helpless” and she wanted to help create an event “where people feel like they have a voice.”

Palmer, 20, said she thinks this incident gained traction because it opened people’s eyes to the “awful way he was killed.”

“I think everyone is able recognize that,” she said.

“When I watched that video it really crushed my soul,” Johnson said.”The lack of humanity in that video opened a lot of people’s eyes to a problem we have in this country.”

Palmer said she is fortunate to live in a community that cares.

“In this community, to me, everyone has their head on their shoulders and they know that is wrong,” she said.

Johnson and Palmer both said many people may have racist attitudes but not necessarily be aware of it, and it’s more covert, not “face-to-face racism.”

But the Floyd death brings it to light.

Another organizer of the event, Monte Lee, 25, of Princeton, said the vigil is for people to have a voice in the community.

All three believe the response and demand for change will continue, not lessen and fade away.

Johnson said she has read that this is the “biggest civil rights movement in the world’s history.”

“This generation is going to change the world,” Palmer said. “I really believe that.”

One of the speakers, Rev. Earl Thompson, pastor of Harvest Outreach Center in Princeton, said he hopes that happens, but he is not optimistic because he has seen attempts for change in the past.

“It would be good if it is the moment (to change history),” he said. “But it doesn’t look good. It’s going to take a whole lot. We’ve got a lot of work to do.”

So much change is needed, he said, he is afraid this movement will “die down.”

Johnson said it will help make people of aware of the problems and many will be sympathetic.

But the larger issue of systemic institutional racism is “not going to change,” he said, because the entire design of the system will have to change and that will mean many people changing as well.

Johnson said the church is what can help the movement because faith does change people.

“I could look for real change then,” he said, referring to a resurgence of faith, and that will also mean it’s on the younger generation because it’s going to take time.

“The change is going to be in the young people,” he said.

Susan Boyd of Princeton was at the vigil, giving away face masks she had made, many with messages like “Love One Another” and “Black Lives Matter.”

She started making the masks when the pandemic first started, but customized some for the event.

Boyd said he is a friend of Palmer’s and when she heard about it she was ready to help.

She said the movement has erupted because the video of Floyd’s death is “so blatant and horrible.”

“I just think people have had enough,” she said. “This is the right moment. It’s time. It’s well past the time.”

Boyd said little has changed in the last 50 years, and now is the time to change it, adding that the movement is “giving us hope again.”

Christine Finley of Princeton attended with some friends.

“I have a very diverse set of friends,” she said. “I am out here to support the idea that we can all love and unite.”

Finley said the event “triggered the cruelty of racism and people are tired of being subjected to cruelty just because of their race or religion or whatever. It’s wrong. It’s just flat-out wrong. I hope we have more change and more understanding.”

Bishop Barry Ealy of Galax, Va. was a speaker and he said people should not forget about what is happening and let it fade.

“I’ve got a new hope that this is going to be different from yesterday,” he said. ““So much diversity is taking place, people are getting involved all over the world and standing with us, standing together.”

Several things must change, he said, including economic equality, better education, more concern about individuals rather than personal pursuits, and equal justice for all.

Ealy said everyone should “pray and vote.”

Several members of the Princeton Police Department were there to talk with and mingle with the crowd during the vigil.