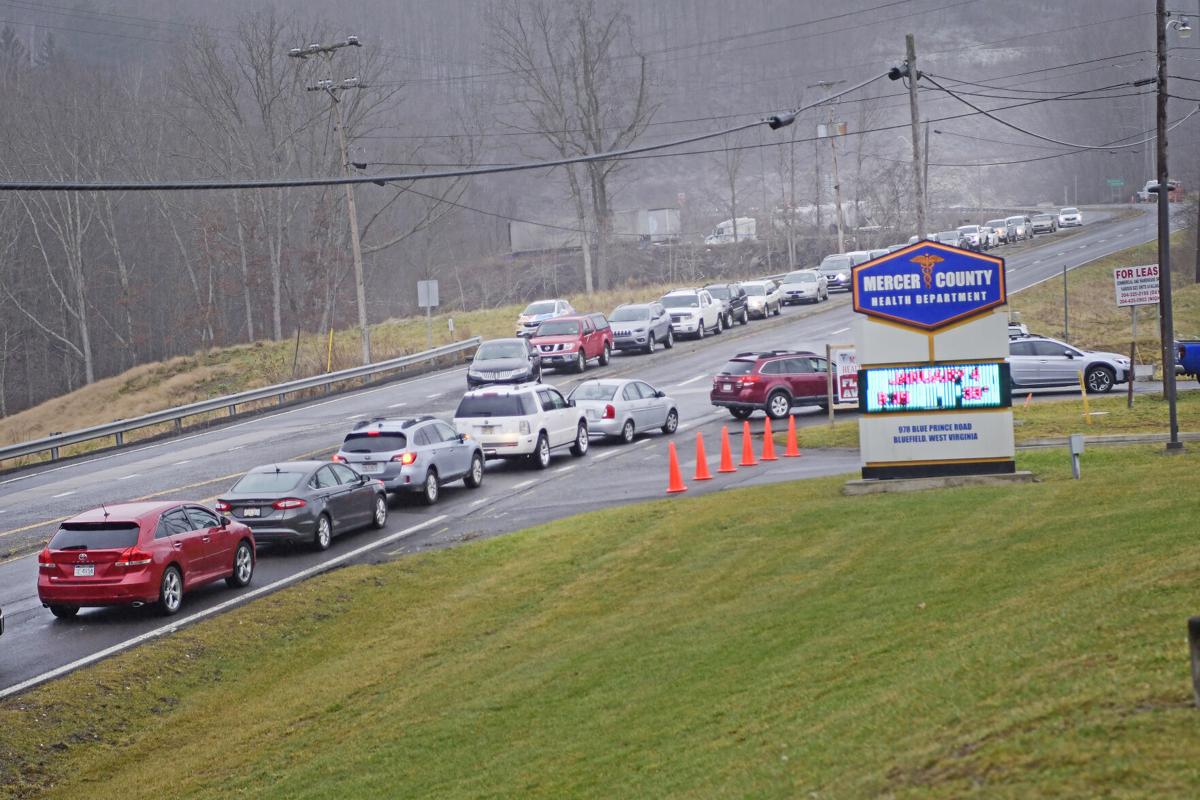 Traffic backs up in front of the Mercer County Health Department Monday morning as the first doses of the COVID vaccine were available to people 80 and over. 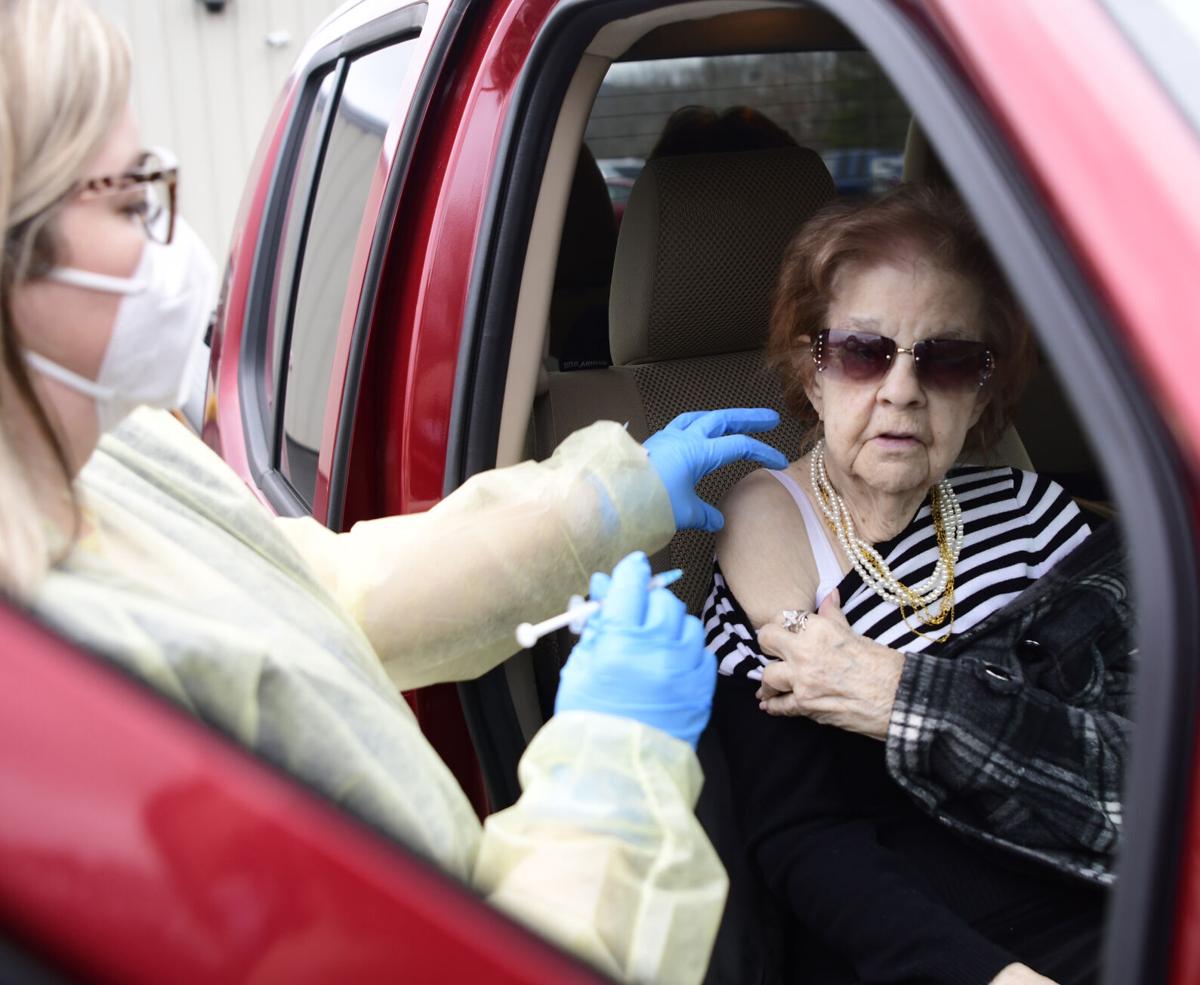 Traffic backs up in front of the Mercer County Health Department Monday morning as the first doses of the COVID vaccine were available to people 80 and over.

KEGLEY — Senior citizens sought their first dose of the COVID-19 vaccine this week while the Mercer County Health Department waited to see whether more vaccine would arrive soon and adjusted plans for getting it to the people needing it.

Vaccinations were offered in Mercer County while officials with the West Virginia Department of Health and Human Resources reporting eight COVID-19 related deaths in Mercer County since Monday bringing the county’s overall number of deaths to 62.

“As the COVID-19 fatality count continues to rise, we must remember that these individuals are daughters, sons, mothers, fathers, neighbors and friends,” said Bill J. Crouch, DHHR Cabinet Secretary. “We owe it to them to continue the fight against this virus with preventive measures such as mask wearing, social distancing and washing hands.”

The health department announced late last Saturday that 100 doses of the Moderna vaccine against COVID-19 would be administered Monday to seniors 80 and older. Vaccinations were scheduled to start about 9 a.m., but some people arrived much earlier. Long lines of vehicles reached into Blue Prince Road and as far as Route 460 at one point. Deputies with the Mercer County Sheriff’s Department provided traffic control along with the West Virginia State Police Princeton detachment. Leading to long lines and the department having to turn people away after the doses ran out. All 100 doses had been used by about 11:45 a.m.

Crystal Gillespie of Mercer County had driven her mother, 84-year-old Velda Ford, to the health department.

“We were here before daylight to get my mom a vaccine,” Gillespie said. “We’ve been staying in, ordering our food online, going through the drive through at the pharmacy, not getting out at all.”

“Well, I”m not excited for myself. I want to save my children,” Ford said.

“She wants to see the COVID stopped,” Gillespie added. “We think the only way to do that is for everyone to get vaccinated.”

The Bluestone Health Care Center along Beckley Road faired better after receiving their 100 doses of the Moderna COVID19 vaccine on Tuesday. The clinic contacted seniors 80 years old and older to make appointments. A small tent was set up outside the clinic where personnel greeted patients and collected their information. After the patients finished their forms, they honked their car horns. The completed forms would be taken into the clinic and a nurse wearing personal protection equipment (PPE) would come outside and vaccinate them. The recipients then waited 15 minutes in the parking lot to make sure they did not have any adverse reactions.

“I went to the Lewisburg hub and picked it up at the West Virginia School of Osteopathic Medicine,” said Susan Plumley, RN, director of quality and risk management.

Bluestone Health has 456 patients over the age of 80, Plumley said as more people arrived in the parking lot. Patients were called in advance until 100 appointments were made, and more were called so they could be alerted if somebody canceled his or her appointment and a vaccine dose became available. The appointments were confirmed before the vaccinations got underway. People who could not attend Tuesday’s vaccinations can receive their first shots when a second round is scheduled.

“We worked through the list and confirmed with them whether they were coming or not,” she stated. Plumley said that the West Virginia National Guard notifies her, the health care association and the association’s CEO Linda Hutchens when vaccine is available for pickup. A date for when the next shipment will be available had not be set Tuesday.

“The only (vaccine) that we got is for health care workers and 80 and above,” she said. “We’ve had no word on any other age groups at this time.”

The vaccinations were scheduled to start at 1 p.m., but they began at 11 a.m. because some seniors were concerned about a forecast for snow, Plumley said.

Cecil Reed, 91, of Princeton said he liked the way that the vaccinations were organized.

“Well, you don’t have to spend all day waiting on it,” he stated. “I didn’t even know they stuck the needle in me.”

In another parking space, Scarlet Lowery of Princeton had driven her friend, 96-year-old Juanita Jennings of Camp Creek, to the Bluestone clinic.

“I think they are doing a fantastic job,” Lowery said while they waited the 15 minutes after Jennings was vaccinated. “The girls are very professional, kind and sympathetic.”

The health department later received word that a large vaccine shipment would arrive and announced that drive-through vaccinations could be done at the Brushfork National Guard Armory on Thursday because of its large parking lot. The Moderna vaccinations would be for people 80 and older.

“We’ll be able to bring them in and then you still have more (room) to let them get their vaccination and then wait in the parking lot to make sure they don’t have a reaction. That gives us more room and since we had such a good turnout (Monday), that will be able to do more people,” Donithan said.