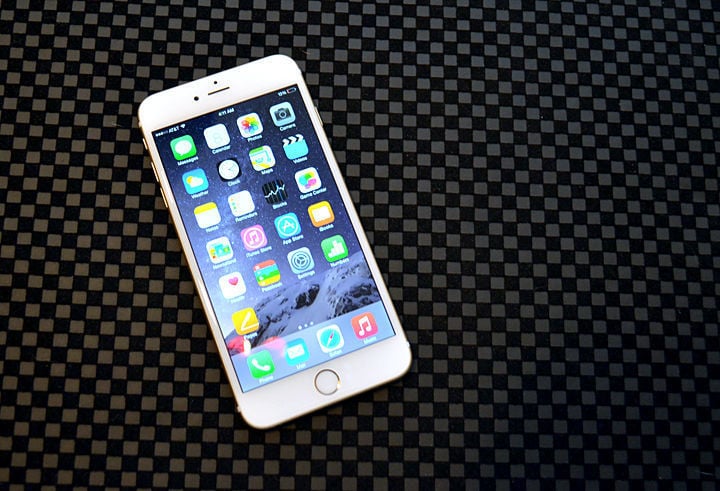 The iPhone 6 Plus featured a 5.5-inch display. 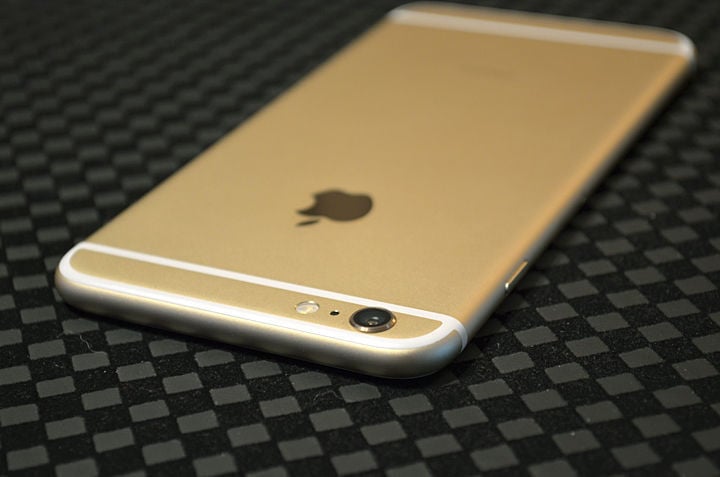 Do not be fooled by the iPhone's 8-megapixel camera. Though other devices have almost twice as many megapixels, the lenses and image processing software makes this one of the best smartphone cameras on the market.

The iPhone 6 Plus featured a 5.5-inch display.

Do not be fooled by the iPhone's 8-megapixel camera. Though other devices have almost twice as many megapixels, the lenses and image processing software makes this one of the best smartphone cameras on the market.

Let's get this out of the way up front: The new iPhones will not bend in your pocket.

When Apple released the details of its new iPhone 6 and 6 Plus, the tech world was polarized by those who loved every detail of the new devices and those who piled on a healthy helping of mockery.

I was in the latter camp. I even wrote a column about how the phone was disappointing because it was a catch-up type of product from a company that was long considered an innovator.

But lately, the phone has been under fire for fake problems, not real ones. Bendgate? Hairgate? Memory hog? After testing out an iPhone 6 Plus for my normal test run period, I can quash those rumors easily:

With the fake stuff out of the way, let's get to the truth: The iPhone 6 is a fantastic phone that gives Apple users some important upgrades and innovative uses. But it doesn't offer users of other phones enough to encourage a switch.

The appearance of the new device is pleasingly modern, though the rounded edges aren't as cool looking as the sharp edges of the iPhone 5. Still, it keeps the traditional thick-thin look with a circular home button, and both models come with some color selections -- not that it matters because most iPhone users I see get a case that covers the phone completely.

Some iPhone fans will be surprised with how the power button has been moved from the top to the upper right side, but this is not a major adjustment. Other controls are just the same, including the home button and the volume buttons.

My only beef is that the smooth aluminum gets slick in the hands, reducing grip. Holding the device with my camera-shooting grip was sometimes challenging. Also, I found it too easy to nudge the mute switch into the silent position.

The biggest upgrade of the phone is the screen size. The 6 offers a 4.7-inch screen, and the 6 Plus has 5.5 inches -- both are a welcome change from the iPhone 5's 4-inch screen, one of the smallest on the market.

Both of the new models feature Apple's Retina HD display -- the 6 Plus I used had a screen resolution of 1920-by-1080 pixels. The display is gorgeous -- everything from Netflix movies to Internet broadcasts of "The Daily Show" looked fantastic.

And Apple users will instantly notice the power of the device's A8 chip, built on what Apple calls 64-bit, desktop-class architecture. "Smash Hit," a game featuring some intense 3-D graphics, ran smoothly like rain down a waxed car's paint. "Badlands," another game I play (and that everyone should play), got a redesign for the phone's new processor, and the graphic enhancements are beautiful.

Another interesting detail: The device handles switches from vertical to horizontal orientations like a breeze. When I watch "The Daily Show" on other devices, the video stays within the web page, which means the whole video doesn't fit on the screen quite right. But when the iPhone is turned on its side for any video application, it stretches the video and nothing but the video across the whole screen.

Despite the improved graphics performance, the biggest thing that benefits from the larger screen sizes is simply the OS. Apple, which has long been married to the idea of pages and pages of grid-filled apps, puts some room to breathe between those icons. (Anyone who misses the cramped style of previous devices can select a zoomed-in option.)

Quite simply, the iPhone is a lot easier to read now. Every app benefits from the bigger screen size, and the processor has more than enough horsepower to handle the increased workload.

The biggest enhancement is in the device's camera. The iPhone's iSight camera is only 8 megapixels, but it produces better results than other devices with almost twice as many.

In a nutshell, the combination of processing software and lenses leads to a camera that captures light gorgeously. I took phenomenal pictures, and that was before I discovered the on-screen exposure control.

The HDR mode has an auto-toggle and saves regular exposures of HDR shots, letting you choose. Auto-stabilization is always on as well. But on other cameras, such a feature usually sacrifices a bit on image sharpness. Not so with this device -- every photo I took was sharp and clear without the slightest bit of blurring.

The Photos app comes with editing functions that are the closest to Photoshop that I've seen. I felt like a pro using the iPhone to correct light and exposure issues, and I was able to adjust colors perfectly. As for video, that's where the camera got the biggest upgrade. The device shoots in 1080p HD at 60 frames per second and can bend time by shooting in slow-motion or time-lapse.

I had more fun using this camera than a lot of other devices -- the ease of use and quality of images explains why a lot of photographers and journalists won't use any other phone.

Much has been made about all the "new" features of the iPhone that have existed on Android devices for the last two years. Some of those things are awesome enhancements; others are somewhat disappointing. Nowhere is that mix better demonstrated than the keyboard. Developers finally opened up the OS to add widgets and other more basic functionality -- one of the biggest areas of improvement was for the keyboard.

The autocorrect is effective and intuitive. I relied on it pretty heavily while writing emails, social network posts and texts. The dictionary is much more helpful and forgiving -- instead of surprise words popping up in the text, the recommendations floated above the keys and left me alone when it didn't recognize a word. I predict that the number of "Damn you, autocorrect" posts are going to plummet.

But I'm disappointed that Apple didn't include a swiping option in its keyboard. Swiping is awesome, but to do it on the iPhone, be prepared to buy an app. The keyboard also keeps its all-caps appearance and doesn't show alternate punctuation that can be entered with a long press. Despite the welcome upgrade, text input is still lagging behind.

The new notification system in the latest OS is also an improvement. It adds a screen that can house some widgets but only in a strict list presentation. Android users won't be happy with the forced presentation, but Apple users will appreciate the extra flexibility and discovery of how some apps (such as Buzzfeed) blend in seamlessly. Evernote's widget is particularly powerful, giving users the option to use functions of the app without opening it.

Everything the iPhone does, it does well. Call quality is excellent -- I didn't experience any dropped calls, and sound was good. The software rarely hangs (I didn't experience a single crash), apps of all varieties are readily available, and the hardware is sturdy and strong. Siri is just as smart as ever, and that camera ... Man, is it awesome.

The iPhone 6 is also screaming fast at Wi-Fi web browsing. Fresh, uncached websites downloaded in less than two seconds, which gives the dual-antenna Samsung Galaxy S5 a run for its money.

But the big problem with using an Apple device means committing fully to an Apple world. Using an iPhone requires doing everything Apple's way, which can be confining.

There are files of all kinds and sorts out there, including movie files and music files. But the iPhone will recognize and work with only a few of them. Saving files to a device comes with extreme limitations, from mild annoyances of app switching to complete frustration.

I use Box and Dropbox cloud services, and I have a variety of files stashed for use. I could open an Excel spreadsheet from Box with an app called Numbers, but it was unclear where that file actually was. It didn't appear I could download a copy for offline use, which meant I had to stay near a Wi-Fi connection or use my data plan.

Music was even worse. After scratching my head, looking up solutions and doing a little bit of cussing, I was not able to download a full album from either Box or Dropbox onto the device for offline playing. I could play them from the file sharing apps, but the music player wouldn't recognize them.

There's more frustration with music: The native music player will recognize only what you've bought from Apple. That means the music I've bought from Amazon, which is played from iTunes on my desktop computer, will not show up on the iPhone -- unless I pay $25 for a subscription to something called Match.

That's simply infuriating. A device that can't recognize an mp3 file and save it to its memory is borderline worthless to me.

And offering only 5 GB of free cloud storage is kind of skimpy, especially for a device with no expandable memory.

The iPhone is an excellent all-around device. Current iPhone users will want to upgrade because the size of the screen alone improves the Apple experience. Videos, games, web pages and even the home screens look fantastic, and apps are easier to use.

There are several price options ranging from about $200 to about $500, depending on device choice and amount of internal memory. Providers such as AT&T also have a variety of trade-in offers to help maneuver around contracts somewhat.

Did Apple do enough to sway other phone users away from their devices? Not with this device, with the exception of the camera. Photographers who want to get high-quality pictures and video from a mobile device will be very pleased with either the 6 or 6 Plus.

But its strict limitations on handling files and rigid notifications have nothing to offer Android users, who are used to much more customization options and home screen looks and find it hard to deal with not having a back button. BlackBerry users will laugh at the iPhone's notification center, which offers only a fraction of the functionality of the BlackBerry Hub.

The best part about the new iPhones is that it gives customers much more flexibility to pick a device they feel comfortable with. Its upgrades bring it closer to a common experience, and that's good for users of all devices.

IPhone 6 Plus photos and review